First, let me say that I have absolutely no business reviewing restaurants. When I order wine I just order whatever red is cheapest. I used to get exclusively Merlots, until I saw the movie Sideways, so now I go with a Pinot Noir, to try to look sophisticated. I used to get the second cheapest bottle, but I read an article that said this was a common ruse by amateurs, that was fooling nobody. On the food side, I often don't know half the stuff on the menu. The only fish I can put a taste to are salmon, tuna, and Chilean sea bass. The only noodles I could identify are ravioli, lasagna and spaghetti. Only when something happens in the news do I learn a new food, like the PETA boycott of Foie gras. So, now that I have established my lack of credentials, let me jump in!

The following is a list of the nicer places I have dined at in Macau. The star reviews are based on a zero to five scale. You should know that the service in Macau is slow compared to the U.S.. Also, nobody will ever bring a check until you ask for it. Nobody ever seems to be in a hurry, so be patient.

8 is one of at least three Chinese restaurants at the Grand (old) Lisboa. The 8 is very formal and dressy. I was completely out of clean clothes one hour before dinner, and the only pants I could find to buy where jeans, so I felt very underdressed in this jacket and tie restaurant. Fortunately, if there was a dress code, nobody forced it upon me. When you enter you walk through a black shiny tunnel, like walking through a portal in a science fiction movie. Inside, everything was dimly lit, and very black and white formal. As I recall, the food and service were fine.

This is the centrally located Cafe at the Wynn. Much like the cafe at the Wynn Las Vegas, the restaurant is between the shopping area and the pool. Customers could either order off the menu or get the buffet. I chose the buffet most of the time. Although the selection was rather small, everything was high quality and tasted very good. I especially like the musli cereal, which you never see at the buffets in the U.S.. For those who have been to the Wynn Las Vegas buffet, the quality was about equal, just on a much smaller scale. All alone in Hong Kong and Macau for two weeks, I ate at the Esplanada many times. The American look and style reminded me of my home in Vegas. My last visit there I left an umbrella. I didn't realize it until the next day, and when I asked for it, they had it there waiting for me.

Is it just me, or is there anybody else out there who thinks Fernando's is overrated? The Lonely Planet, and lots of web site reviews, rave about it. The reviewer for About.com says it is, "one of the best restaurants in South East Asia." I was taken there by an American living in Macau, and I must say that she really likes it. She lamented the recent publicity it has received, because now you have to wait a long time for a table, and they don't take reservations.

The restaurant is in an informal open-air structure right on the beach in southern Coloane part of Taipa island. There is no air conditioning, and we were there on a brutally hot and humid afternoon, even by Macau standards. The house specialty is seafood. I don't remember the type of fish I ordered, but it was served full fish style, where one has to pick through the bones to get the meat. The food was fine, but didn't stand out in my opinion as anything special. Despite the heat, the place was packed to capacity, and the service seemed to suffer as a result.

Compared to other restaurants I had in Macau, I just don't see the fascination with this place. I'll grant that is has a nice beach-hut type atmosphere, but that is all I will concede. My apologies to Kathi if she reads this, and I hope she doesn't, but you are a tougher diner than I am.

Litoral is a two-story restaurant in the heart of the shopping area on the Macau peninsula, near Senado Square. I thought it was Portuguese food at the time, but a web site about the restaurant (see link below) says it is traditional Macanese food. Either way, it was fantastic. Everything tasted very homemade and fresh. The restaurant itself seemed to be in a converted house, and decorated as such. The service was outstanding, there was never waiting for anything. This was my favorite meal in Macau!

The Madeira serves Portuguese cuisine at the base of the Macau Tower. When I was there for dinner the restaurant was busy and crowded. Every table was taken, and reservations were required. The atmosphere was noisy and casual. A musician played pop music on a small keyboard, a bit too loudly in my opinion. The food was very tasty and unique, at least to me. The service did not equal the food, the waiters seemed very rushed, and the average time between table visits was rather long. Overall, the food was worth waiting for, and worth a repeat visit for. That probably explains why it was so crowded.

Naam serves Thai food at the Mandarin Oriental Hotel. The restaurant overlooks the hotel pool and surrounding gardens. The decorating inside was very modern, peaceful, and welcoming. There was a lot of space between tables. When I was there, at the closest table, was the president of the Crown casino, or so I'm told. The food was delicious and out of the ordinary. Our waitress was very nice, and always on top of everything.

Portas del Sol is one of at least three Chinese food restaurants at the Grand (old) Lisboa. During lunch they serve dim sum, which was when I was there. I found the food very good, and the service fine. Unlike many dim sum restaurants, this one was elegant and well decorated. I met a very nice waitress named Lynn from Lei Feng's homeland. She sang part of the Lei Feng song for me, and told me her favorite story about him. Lei Feng is my hero (this coming from a free market capitalist in the gambling business), and to hear from a fellow fan made my day! Signage in the hotel elevator indicated the restaurant has live music in the evenings. If you should go there, ask for Lynn, and tell her the Lei Feng fan from America says hello.

The Royal Orchid is a Shanghaiese restaurant at the Landmark hotel. I had lunch there with three clients. Perhaps it was that I didn't notice many other customers, but the service was outstanding. They had at least three people bringing dish after dish, and at least one person standing in the room on call, should we ask for anything. The food was served family style, on a Lazy Susan. To be honest, I have been to Shanghai three times, and I still don't understand the difference between Shanghai Chinese and general Chinese food. This meal did not provide the answer to that question, but the food was still good. 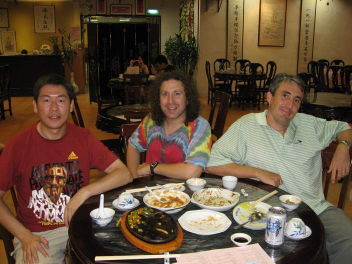 My friend and business partner Michael Bluejay did some searching online, and found this place listed as the better of the two vegetarian restaurants listed in Macau. He is a level 3 vegan, so when we are together that pretty much makes me one too, temporarily.

We gave the taxi driver the address of the restaurant. As an aside, never show a Macau taxi driver a map, pointing to where you want to go. I'm of the opinion that Macau people hate maps. I never saw a nice detailed one of the entire SAR while I was there. If you hand a taxi driver a map, as I like to do, he will act like you just handed him a dead fish.

To get back to the point, the Vegetarian Farm is a large room with lots of big round tables. On the walls are lots of Buddhist statues and stuff. Clearly lacking is a good air conditioner. All the food is served family style, on a Lazy Susan, where you scoop out for yourself what you want. Be sure to use the serving spoons and not your own chopsticks (Bluejay reprimanded twice me for doing this). The food is your basic Chinese vegetarian dishes. Nothing that tasted especially good, perhaps partially because it was vegetarian. The waitress was a bit slow and acted like we were bothering her too much.

We had to walk about half an hour to get back to our hotels. The way back was not on major streets, and what few taxis we saw did not have their light on. Fortunately, I had a map with me, as always.